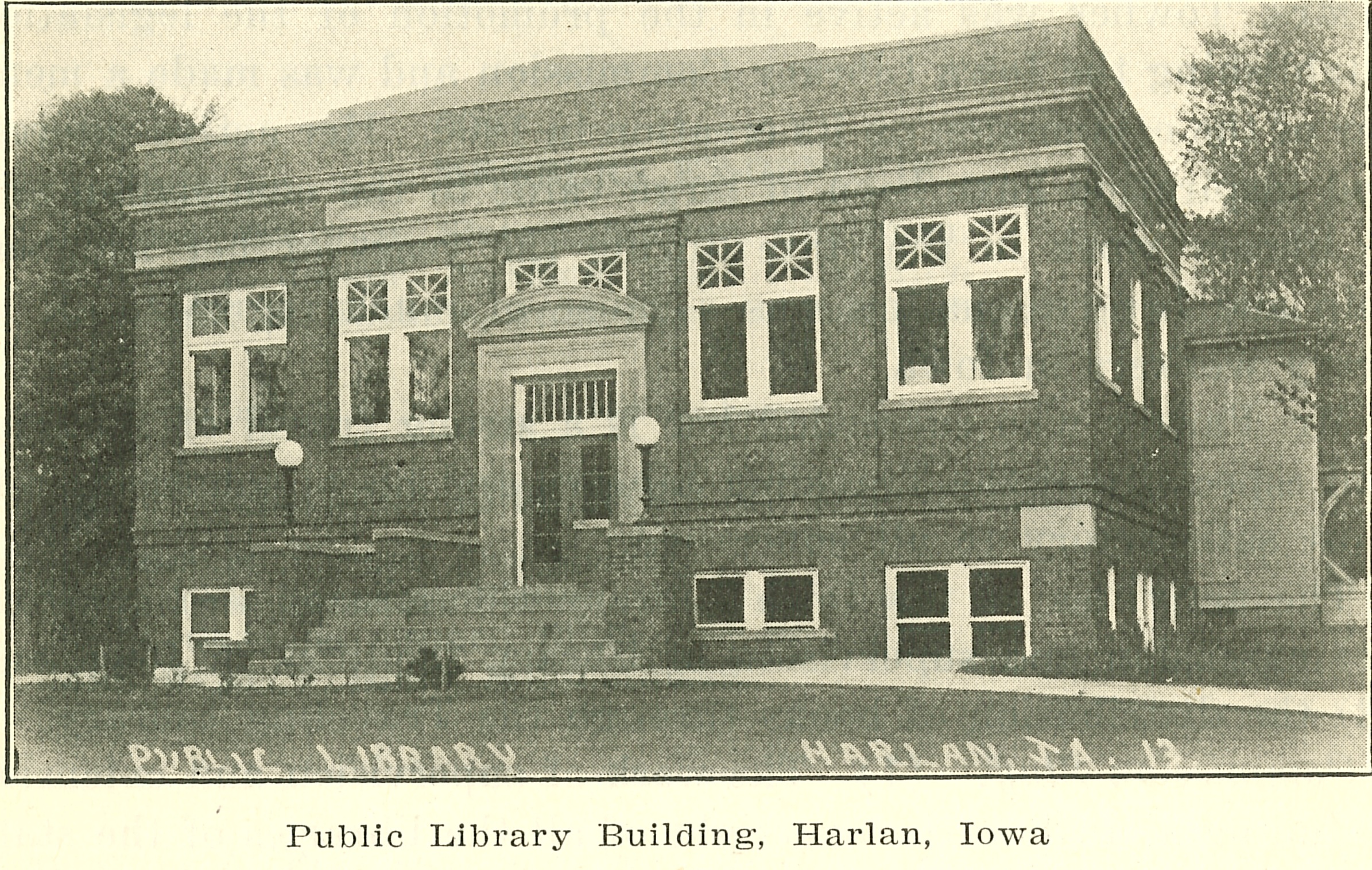 Origins of the Harlan Library began in a jewelry store in 1875.

The earliest circulating library in Harlan was established in the Tinsley Brothers Jewelry Store building in 1875 (north side of the square at 620 Market Street) and existed until 1882.  Later the W.C.T.U. opened a supervised reading room for the public.

In 1889, a library was started in the south room of the American Baptist Church on the northeast corner of 7th and Durant.  Donations of many books were made.

In 1897, the P.E.O. sisterhood established a library and many fundraising parties were held to finance book purchases.  Volunteers from the P.E.O served as librarians and books could be checked out on Saturday.

The P.E.O., in 1904, enlisted the help of ladies from the Harlan Literary Club, Women’s Union, and Friday Club to form a Library Assn., to request help from the city council for a Free Public Library.  The library proposition was defeated at the city election.

On June 14, 1920, a room in the new Central high school building opened as the Harlan Public Library.  In March, 1921 H.H. Paup revealed he would give the library board and the city $20,000 for a library to be built in his name, and he would supervise construction when he returned from a vacation trip to California via the Panama Canal.  The city was to pay him 5% interest on the money as long as he lived.  Mr. Paup died of pneumonia while in California and did not supervise or even see his memorial.

From the Paup will, the library board received a special gift of $1,000 in perpetuity.  The interest on same to be used to buy Christmas treats for the children of Harlan without restriction.

In August 1923, bids were let for the Paup Library.  Morris Frederickson, Harlan contractor, $19214; Enenback Plumbing, $1,888, and Anderson & Spooner, Council Bluffs, architects, $1,000 for the 42’ x 48’ brick and stone building patterned after the Council Bluffs Carnegie library.  All furnishings came from donations.  The budget that year was $2,500 for salaries, utilities and books for a library serving a population of 2831.

In December 1979, the board voted to build a new building and a fund drive began.  Generous gifts and memorials from any individuals, organizations, and businesses helped this dream come true.

When the offices of the city of Harlan moved to a new location and the old city hall was demolished, the library board was offered the site at 718 Court Street.

Over $400,000 was received in donations, plus $200,000 from the City of Harlan, $75,000 from Shelby County revenue sharing, and $20,000 grant from the Kinney-Lindstrom Foundation to provide our community with a new modern library for today and the future.  Groundbreaking for the construction of the building was on June 24, 1980.  With the help of volunteers, the move to the new debt-free building occurred on August 25 and 26.  The new library officially opened on August 31, 1981.